Is it a Crime to Catch Rainwater? 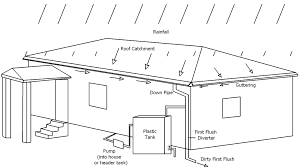 It is not a criminal offence to collect rainwater.