Is it a Crime to Panhandle? 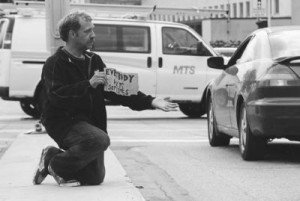 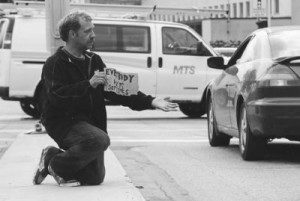 Aggressive panhandling is a provincial offence in Ontario.

Consolidation Period: From December 15, 2005 to the e-Laws currency date.

“solicit” means to request, in person, the immediate provision of money or another thing of value, regardless of whether consideration is offered or provided in return, using the spoken, written or printed word, a gesture or other means. 1999, c. 8, s. 1.

“aggressive manner” means a manner that is likely to cause a reasonable person to be concerned for his or her safety or security. 1999, c. 8, s. 2 (1).

(3) Without limiting subsection (1) or (2), a person who engages in one or more of the following activities shall be deemed to be soliciting in an aggressive manner for the purpose of this section:

5. Soliciting while intoxicated by alcohol or drugs.

6. Continuing to solicit a person in a persistent manner after the person has responded negatively to the solicitation. 1999, c. 8, s. 2 (3).

“public transit vehicle” means a vehicle operated by, for or on behalf of the Government of Ontario, a municipality in Ontario or a transit commission or authority in Ontario, as part of a regular passenger transportation service; (“véhicule de transport en commun”)

“roadway” has the same meaning as in the Highway Traffic Act; (“chaussée”)

(a) solicit a person who is using, waiting to use, or departing from an automated teller machine;

(b) solicit a person who is using or waiting to use a pay telephone or a public toilet facility;

(c) solicit a person who is waiting at a taxi stand or a public transit stop;

(d) solicit a person who is in or on a public transit vehicle;

(e) solicit a person who is in the process of getting in, out of, on or off a vehicle or who is in a parking lot; or

(3) Subsection (2) does not apply to fund-raising activities that meet the following conditions:

1. They are conducted by a charitable organization registered under the Income Tax Act (Canada) on a roadway where the maximum speed limit is 50 kilometres per hour.

(a) a place outdoors to which the public is ordinarily invited or permitted access and, for greater certainty, includes but is not limited to a sidewalk, street, parking lot, swimming pool, beach, conservation area, park and playground, and

(2) No person shall dispose of any of the following things in an outdoor public place:

2. A new or used hypodermic needle or syringe.

(3) It is a defence to a charge under subsection (2) for the person who disposed of the condom, the needle or syringe or the broken glass to establish that he or she took reasonable precautions to dispose of it in a manner that would not endanger the health or safety of any person. 1999, c. 8, s. 4 (3).

(2) For the purpose of determining the penalty to which a person is liable under subsection (1),

6. A police officer who believes on reasonable and probable grounds that a person has contravened section 2, 3 or 4 may arrest the person without warrant if,

(a) before the alleged contravention of section 2, 3 or 4, the police officer directed the person not to engage in activity that contravenes that section; or

(b) the police officer believes on reasonable and probable grounds that it is necessary to arrest the person without warrant in order to establish the identity of the person or to prevent the person from continuing or repeating the contravention. 1999, c. 8, s. 6.