Is it a Crime to Shoot Someone Who is Already Dead? 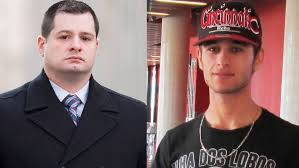 Toronto police officer, James Forcillo, was convicted of attempted murder for shooting, Sammy Yatim, who was already dead at the time the shoots in question were fired.

(i) in the case of a first offence, five years, and

(ii) in the case of a second or subsequent offence, seven years;

(b) in any other case, to imprisonment for life.

(2) In determining, for the purpose of paragraph (1)(a), whether a convicted person has committed a second or subsequent offence, if the person was earlier convicted of any of the following offences, that offence is to be considered as an earlier offence:

(a) an offence under this section;

Marginal note:Sequence of convictions only