Is Drug Paraphernalia a Crime? 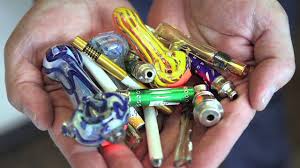 Possession of drug paraphernalia in and of itself is not a criminal offence .

Offence
462.2 Every one who knowingly imports into Canada, exports from Canada, manufactures, promotes or sells instruments or literature for illicit drug use is guilty of an offence and liable on summary conviction

(a) for a first offence, to a fine not exceeding one hundred thousand dollars or to imprisonment for a term not exceeding six months or to both; or

(b) for a second or subsequent offence, to a fine not exceeding three hundred thousand dollars or to imprisonment for a term not exceeding one year or to both.

Proof of the Offence

Can the police search me if I am in possession of drug paraphernalia?