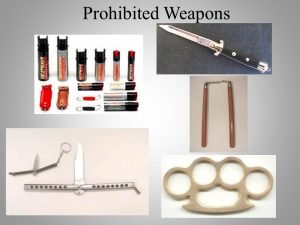 1. Any device designed to be used for the purpose of injuring, immobilizing or otherwise incapacitating any person by the discharge therefrom of (a) tear gas, Mace or other gas, or

(b) any liquid, spray, powder or other substance that is capable of injuring, immobilizing or otherwise incapacitating any person.

4. Any finger ring that has one or more blades or sharp objects that are capable of being projected from the surface of the ring.

6. A crossbow or similar device that

7. The device known as the “Constant Companion”, being a belt containing a blade capable of being withdrawn from the belt, with the buckle of the belt forming a handle for the blade, and any similar device.

8. Any knife commonly known as a “push-dagger” that is designed in such a fashion that the handle is placed perpendicular to the main cutting edge of the blade and any other similar device other than the aboriginal “ulu” knife.

9. Any device having a length of less than 30 cm and resembling an innocuous object but designed to conceal a knife or blade, including the device commonly known as the “knife-comb”, being a comb with the handle of the comb forming a handle for the knife, and any similar device.

10. The device commonly known as a “Spiked Wristband”, being a wristband to which a spike or blade is affixed, and any similar device.

11. The device commonly known as a “Kiyoga Baton” or “Steel Cobra” and any similar device consisting of a manually triggered telescoping spring-loaded steel whip terminated in a heavy calibre striking tip.

12. The device commonly known as a “Morning Star” and any similar device consisting of a ball of metal or other heavy material, studded with spikes and connected to a handle by a length of chain, rope or other flexible material.

13. The device known as “Brass Knuckles” and any similar device consisting of a band of metal with one or more finger holes designed to fit over the fingers of the hand.