Can I Travel to the United States with a Criminal Record?

Sometimes decisions and choices we make as youth or adults come back to haunt us in ways we may not think about. One of these situations may be having a criminal record on your files. What may seem as a minor infraction could have sever consequences in the future if you plan to travel abroad. In trying to understand the ramifications of a person criminal record let’s look at the restrictions and requirements for entry in the United States of America.

If you have any criminal record, no matter how minor or how long ago the offense, you may be refused a visa or entry to the United States. Even if you have been accepted in the past you can be denied entry based upon disclosure/discovery of your criminality. Not all criminal convictions make a person ineligible to enter the U.S, but if a person currently has a criminal record or had one in the past it must be declared. If a person attempts to gain entry without declaring of a present or past criminal record the consequences are either permanent ineligibility or detention at a U.S Department of Homeland Security (DHS) enforcement facility while a Customs and Border Protection (CBP) officer determines your admissibility.

What Crimes will Prevent Me from Crossing the Border?

Generally, an impaired driving conviction will not prevent you from travelling to the United States.

However, if you have multiple impaired driving convictions, this could prevent you from travelling.  Any drug possession offence will likely result in you being denied entry into the United States from Canada. If you have a conviction for a crime that is considered an offence against “moral turpitude” this conviction will likely result in you being refused entry. Crimes considered offences against moral turpitude include murder, sexual assault, assault, fraud, robbery, etc. Further, multiple petty crimes in a short span of time could also give a border agent cause to refuse you entry. 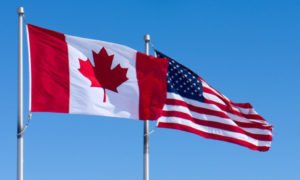 United States Customs agents have access to the Canadian Police Information Centre (CPIC). Through this database, agents are able to view Canadian criminal records, outstanding charges and warrants. It does not matter how long ago your criminal conviction was – US customs agents will be able to view it. With this in mind, if you are asked about any criminal convictions or outstanding charges, you should tell the truth.

Because decisions to deny or allow entry to the United States relies mostly upon the discretion of individual customs agents, it is impossible to state that a certain person would be deemed admissible or inadmissible at all times.

Can a Discharge be a Barrier to Travelling to the United States?

Even though a discharge is not a conviction, it is still evidence of guilt. Depending on the seriousness of the discharge it may affect whether or not you will be granted entry. Here are some examples of cases where people have been found admissible: assault, mischief, trespass and fail to comply with a court order. However you must keep in mind if you have more the on conviction for any of these you can be denied entry
Some examples of charges where people have been found to be inadmissible include: crimes of violence, crimes of sexual assault, and crimes of moral turpitude which include: fraud, possession of stolen property and drugs offences to name a few.

Can A Peace Bond Affect My Ability to Travel to the United States?

A peace bond is not an admission of guilt, and will not result in a criminal record However, the authorities will have a record of the Peace Bond therefore you should consider waiting until these records are removed from your file.

It’s often said that actions have consequences. Poor decisions of past can and will can restrict your wanting to travel to the U.S.

Know your rights so you can travel safe and legally.

United States Customs agents are entitled to look at your cell phone, laptop or other electronic device when you cross the border. They do not need a warrant or reasonable grounds to do so. They can demand you provide your password to any device you have with you.

There are some limits, as agents cannot use your device to access files held remotely. However, agents can look through any photos, text messages, emails or other files stored on your device. If you are asked for instance about your drug use, and you respond in the negative and an agent accesses your phone and locates a picture of you participating in recreational drug use, you will likely be refused entry.

Further, answering falsely to questions put to you by customs agents can potentially damage any future attempts to enter the United States, as you will likely be flagged for false statements to customs agents. If you are worried about items on your electronic devices, the best practise is to leave those devices at home.

What are the Rules about travelling to the United States with Cannabis?

However, officials have advised that asking about cannabis consumption will not be routine for US border agents. This being said, if you are asked about your cannabis use, you should not lie. You can refuse to answer the question, which may result in you being denied entry for that day. A positive answer to the consumption of marijuana at any point in your life, even if you do not have a criminal record could be enough to potentially ban you from ever entering the United States.

While Pardons/Record Suspensions will assist in most people when applying for jobs, volunteer positions or home rental applications in Canada, they are not necessarily of assistance in travelling to the United States. US customs will not recognize a Canadian Pardon. Therefore, your criminal offence will still show up if a CPIC check is conducted, and still be considered by the customs agent is determining your admissibility to the country.

This process can take up to a year, and costs $585.00  USD, regardless if the application is successful or not. You will need to submit a number of other documents, including fingerprints, police records and a personal explanation of the circumstances of the crime(s) you committed. Most of these documents will have an additional cost.

The process for obtaining a waiver is lengthy and can be complicated. If you require guidance and assistance, Toronto Defence Lawyers are able to assist.